Soon after I rebooted my Lego hobby, I fell in love with the Red Dragon from the Red Creatures (31032) set. When I saw the Mighty Dinosaurs in the first 2017 catalogue, I knew I had to get my hands on that one too. Not to my disappointment.

Let’s get the box over and done with. The front side of the box (see above) looks neat with a volcano in the background and the remains of a dead dino at the feet of the T-rex.

The backside gives no additional surprises. The same models but with a more equal space distribution, so you can have a good look at the other two of this 3in1 box.

Then the side, well the only interesting one. More of the same and a 1:1 picture of a 1×2 plate with the white pointy things that do well as teeth but also as fingers on the wings of the flying dinosaur. Is it a Pteranodon? Let’s stick with that. Thirdly, the part is also used as the serrated edges at the head shield of the triceratops.

One side also advertises Lego Life which turns out to be an app for your tablet but I am going to ignore it here since I bought the box to build Lego not to tap a screen.

Then, what’s in the box? Three booklets for the three models and three bags of bricks. One for the biggest parts, one bag for the smallest parts and one for the mid-sized parts. No surprise, no mystery. 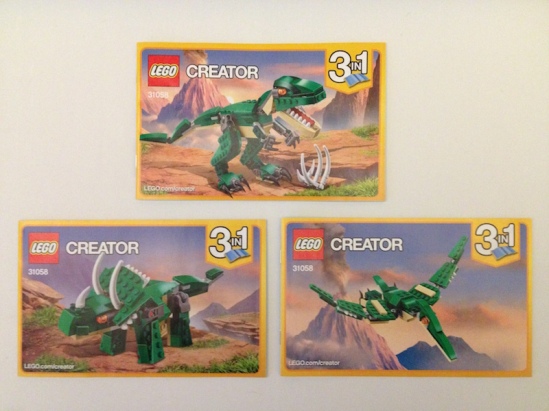 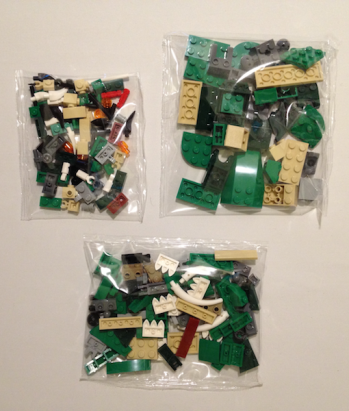 What is a nice surprise is that this is actually a 4in1 box. The fourth model is a Brontosaurus. You can download the building instructions from http://www.lego.com. I checked it. It is there.

What I like about the Creator theme is that it finds a good middle ground between detailed modelling with large amounts of special bricks on the one hand and the type of building of the pre-1980s. These are sliding scales, of course, but still. The Creator theme gets you decent-looking, highly playable, sturdy and yet very recognizable models. True to this middle ground, this box contains many basic and close-to-basic bricks and some special ones. According to the manual, the box contains 174 bricks divided over 68 different shape/color combinations. This is not counting the eight spare parts (shown below).

Overviewing all these, what stands out is the collection of hinges. There are about 45 parts that perform a role in some form of hinge. The picture shows all the varieties used in this set.

Next, here is something familiar to most Lego fans, but since I have just come out of my dark years, these are new to me. So, it is time to pay my homage to Lego’s greatest invention after the studs-on-top: studs-on-the-side. The Mighty Dinosaurs set has three types of them. The 1×1 tan brick has two side studs on adjacent sides, which is new for 2017 according to BrickLink. The 1×1 brick with studs on 4 sides was introduced in 1985, so I wonder, why wait 30 years with the adjacent-sides version?

Also new in this set are some parts that are new because they are available in dark green: a 2×2 brick with ball receptacle (and axle holder), a 4×3 open wedge that forms the eyebrows of the T-rex, and the left and right 2×3 wedge plates.

Apparently not that new, but a very puzzling part to me when I saw it the first time is this one. Technically speaking it is a pneumatic hose connector with an axle holder attached to it. It makes for an excellent nail holder as I’ll explain below.

Spare parts after building the T-rex. None of the other 3 models use any of these spare parts, so they are really extra.

The set is part of the Creator theme and advertised for ages 7 to 12, so to me it does not seem a difficult model. It could be different for a 7-year old builder. I am really curious, because compared to the 1970s building instructions, the current ones are a giant leap ahead. However I feel Lego has overshot it’s target here, which is why I wonder what a 7-year old thinks of it. 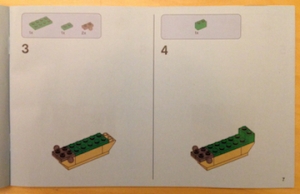 Recently, I rebuilt my Technic fork lift (852). In some places, it needs a bit of three-dimensional insight to figure out which brick goes where. Those days are over, fortunately. But to spend an entire image to show where one single brick goes after an image where three bricks are placed in a row leaving a conspicuously empty spot? I count about 10 such overly clear steps in the 52-step manual, which makes me wonder what the reasoning is behind the design of the building instructions?

If anything, I find the design elegant, perhaps with the exception of how some of the hinges are used. When it comes to the overall shape: I like it a lot. It really looks like a T-rex and it stands firmly. If I have to point out a flaw, I’ll say that the front paws seem too long. One stud too long to be precise, and their claws are one stud to wide. In defense of the design, the mistake is of course with the T-rex itself. It looks hideous and unreal, even for a dinosaur, with those ridiculously small front paws.

Technically speaking, the design is quite similar to that of the dragon from the Red Creatures set, so the basics have been tried and tested. Moreover, there is a cousin T-rex as one of the additional models in the Roaring Power (31024) set. I haven’t built that one, but having checked its building instructions, I think one could make an interesting comparison of the building techniques that are used in these two T-rex models and the Red Dragon. Possible topics could be the use of hinges, the design of the legs and feet and differences in the construction of the heads.

I’m not sure whether it is a flaw or a smart solution, but the T-rex’s head is too long and/or heavy for the small ball-hinge that connects it to the neck. On static display, the hinge is strong enough to keep the head steady in any position, but a small movement of the entire model will make the head nod downwards. A green 1×2 plate prevents it from dropping completely and holds it in a natural position. So, the hinge is not strong enough, but there’s a good work-around.

Upon further inspection, the hinges between the neck and the body also don’t allow the neck to bend downwards. And at the back-side of the body, the first tail-part also has a block. Here it is a round 2×2 plate so that the tail can still move left and right. The overall result is that the T-rex can hardly bend forward, but it can bend backwards to the extent that it can almost kiss the tip of its tail.

To finish the technicalities, there is an interesting technique to put the middle toenail of the hind legs a bit higher than the outer ones. This is where the pneumatic hose connector gets a creative application. The pin of the nail fits in the centre of the axle holder and two clips hold the two sides of the connector. The box’s illustrations nor the building instructions advertise it, but this construction allows the nail to hinge downwards. It could be a nice technique to make retractable cat nails.

Below a few pictures of the major building stages of the T-rex.

The color scheme is well-chosen. The basics of it have also been tried and tested. Just like the Red Dragon, the T-rex has tan at the bottom. This goes all the way from the chin to the neck to the belly to the tail. The top side is green. No-one knows what colors dinosaurs had, I believe, and they may as well have been green-ish. Mixing in some dark-green parts adds a lot, and since it’s a children’s set, the brightest of the two was wisely chosen as the main color.
The scheme is broken by some highlights. I’m not sure if the grey color of the hinge parts is good. In favor: it breaks the green. Against: it is not green and makes the model look like robosaurus. The fiery orange eyes beneath the dark green eyebrows give the T-rex its dangerous looks. The big rows of teeth may have something to do with that as well…

The Pteranodon, the triceratops and the Brontosaurus

Unfortunately, I don’t have time to discuss the other three models. Hopefully the pictures will do. In terms of color scheme they are all the same. In terms of shape, the four are markedly different and do equally well. The T-rex, which has the largest number of parts, probably serves as the selling point of the set. But in the end however, I’m tempted to buy three more sets, so I can display the four at the same time.

I’m more into building than into playing with the resulting creations, but I am guessing the T-rex and its cousins have a high playability. There is the attraction of the dangerous animals packaged in a bright color scheme that makes them good toys. They are also loaded with different kinds of hinges which makes them ideal study objects for children who are not familiar with the concept. Moreover, the hinges allow for endless variations of positions which must be a lot of fun when playing.

The Pteranodon has great wooshability, provided you keep the head straight. Otherwise the head works like rudder and since it is at the front side it makes flying characteristics a bit unstable. Also, the Red Dragon and the Pteranodon make a great flying team.

Finally, do note that the models are on minifigure scale, in particular the T-rex.