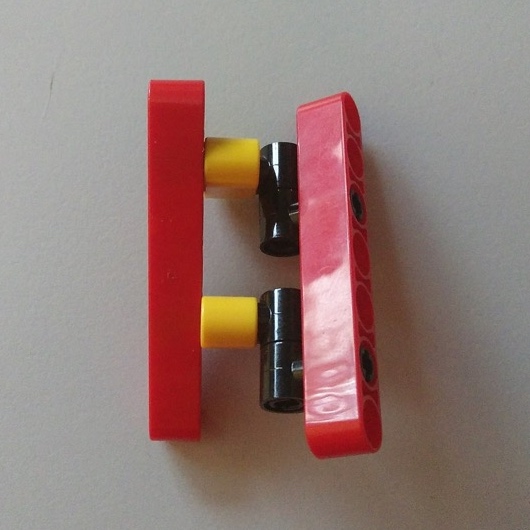 Today, on Rebrickable, I found a design and very instructive demonstration  video of a Mobius Ring by LegoOri. I knew about the Mobius Ring, but did not know about splitting it in two. However, in my humble opinion, the design lacked a good hinge solution between the elements of the ring. Since lately, I have been occupied with making round shapes out of flat shapes and hinges, I tried to come up with an alternative. I think the hinge above does the job. Unfortunately, I cannot prove that it will work by building a full ring because I lack some parts. Also, the design requires a lot more space to make a simple Mobius Ring. It will become quite a project to make one that can be split in two, like LegoOri’s

Here are the building steps as a photo sequence.

To make a Mobius Ring with inflexible elements such as Lego, one needs hinges in two directions: Twists and turns, so to say. 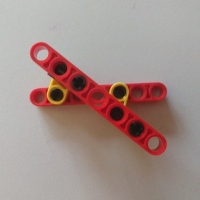 One set of hinges makes the twist that causes the two sides of a Mobius Ring to attach to each other and become one side.  This is done by the yellow 2L bars. They need to be bars, or ‘hinges with some length’, in order to simulate the stretch that exist in flexible material – such as the paper strip in LegoOri’s video.

Notice that in the fourth image of the building instructions, the two red bars are offset by one hole against each other. This is to compensate for the asymmetry caused by the orientation of the yellow bars (they have to be able to rotate in parallel in the same direction). Because of this offset, the final Mobius Ring can only twist in one direction, in the other direction the ends of the strip of linked hinges will not meet to form a ring. At least that is what I expect. 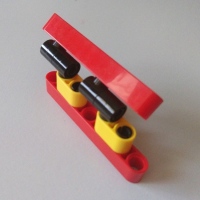 The second set of hinges consists of the black pin-with-pin-holes. They allow the elements (represented by the red bars) to form a ring. Notice that in this design they can also work as the yellow-bar hinges to generate the twist. However, the yellow-bar hinges can not generate the turn to form a ring. Also note that one could replace the pin-with-pin-holes that are connected to the red bar by another construct.

Combining the two will give the needed effect to make a Mobius Ring. 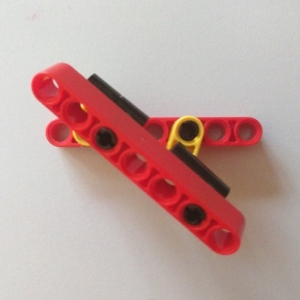 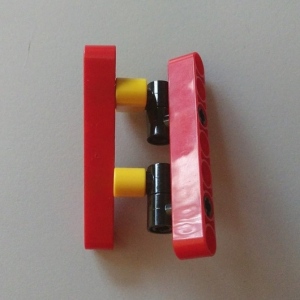 To make a complete ring

To make a complete ring, you need to make a number of these elements and attach them to each other back-to-back in a regular pattern. It will make a strip that goes side-ways because of the offset that I mentioned above.